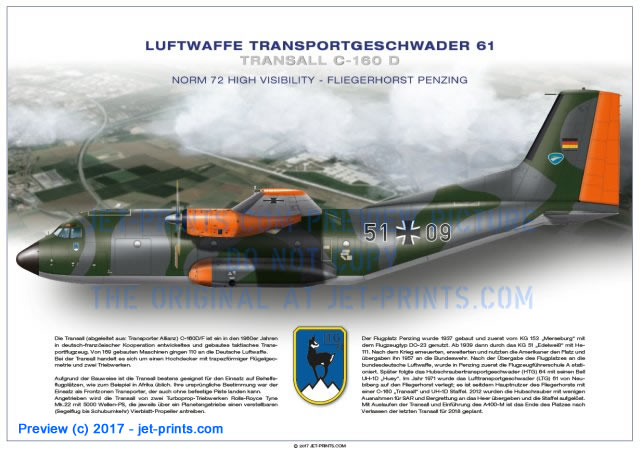 The Transall (mix of 'transport' and 'alliance') C-160D/F is a german-french transport aircraft project from the 1960s. On January 28, 1959, four companies of the later "Transporter Alliance", Weserflug, Hamburger Flugzeugbau HFB, Engineering Blume and Nord-Aviation from Paris, signed a basic contract about a developement partnership. A month later the german-franco work alliance was founded. The work was devided this way:


Overall 169 planes were built. 50 went to the armee de l'air, 110 to the german Luftwaffe and 9 to Southafrica. 1976 a second lot for 25 planes was projected, the Transall NG (New Generation). All planes went to France. Additionally 4 planes for special operations were built and 4 planes for Indonesia. In the 1970s germany sold 20 used airplanes to Turkey.