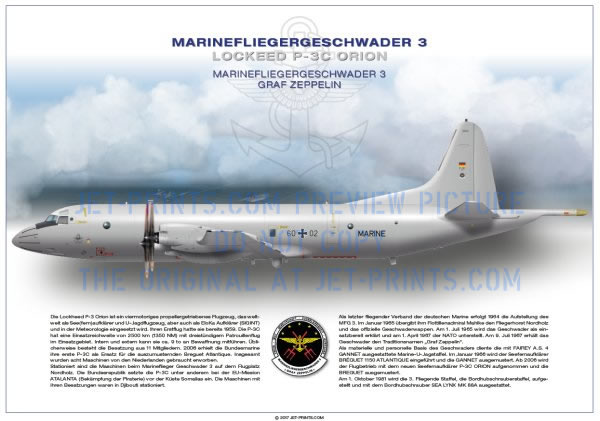 The Lockheed P-3 Orion is a four engine propeller driven airplane which operates worldwide as a nautical reconnaissance and surveillance aircraft, as a counter submarine means and for meteorological operations. Her maiden flight was already in 1959. The P-3C has an operational range of 2500 km (1350 NM) with a 3 hour station time in the area of operations. On internal and external stations she can carry 9 tons of weapons. Typically the crew consists of 11 members.
In 2006 the German Navy got their first airplane as a substitute for the Breguet Atlantique which was designated to be set out of service. Overall eight used airplanes were bought from the Netherlands and stationed at Naval Wing 3 in Nordholz near Bremen.
The Federal Republic of Germany used the P-3C besides other operations during the EU-mission ATALANTA along the coast of Somalia to fight piracy. Airplanes and crews were stationed in Djibouti.